The Rainbow is a sensuous novel following three generations of Brangwens, a well to do farming family in the rural midlands of England, starting with Tom Brangwen, his Polish step daughter and finally Ursula (his grand daughter). D.H. Lawrence was a controversial writer of his time for his exploration of sensuality and this novel is no exception. As the book follows the three generations of Brangwens, the fulfillment of each individual becomes more sexual in nature. The beauty of this novel lies in the exploration of sensual fulfillment as social mores become more relaxed. However, as a novel of the early 20th century, there are no graphic depictions of sex but a more literary presentation rich in metaphors that come across stronger, leaving the reader with potent imagery mixing with our own imagination.
Lawrence’s presentation of love, marriage, aging, death and birth spanning across three generations is masterful. You can’t help but feel the pain of watching the lives of characters you come to love pass through their phases and finally coming to an end. Although, Lawrence was rarely recognized in his own time, his novels are surely literary works of the highest distinction and this book is no exception. 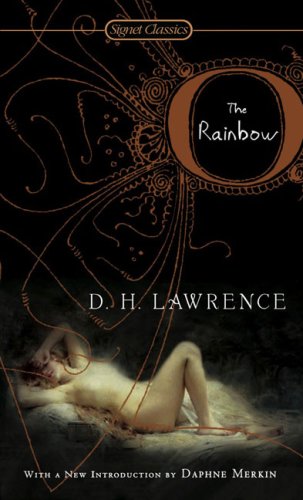 The Rainbow by D. H. Lawrence