The Audacity of Hope by Barak Obama is an unique and remarkable work that captures the essence of the man. The beauty of this book is its ability to capture Obama the father, the politician, and the American. It captures the driving forces in American politics from political parties, values, the Constitution, politics, opportunity, faith, race, globalization, and family.

The magic of this book is how it delves deeply into American core values with sweeping panoramas while maintaining the immediacy of someone on the front lines. The balance of this book sets it apart from similar works. Obama presents America to us as both an insider and outsider. He captures the immediacy of community struggles while presenting the greater campaign unfolding from the Senate floor.

Unlike his previous work, Dreams from My Father, the focus of this book is not Obama himself but American society and its future. We are no longer dealing with a young man on the brink of delivering to greater promise but a man who has to a great extent fulfilled that promise in the national arena. The book is tempered by the years of experience in the Illinois state legislature, as a lawyer, and instructor of law. He speaks with candor and conviction without preaching. Regardless of your political affiliation it’s a book worth reading to get an insight into our future President and something that peels away at all the hype and veneer of campaign politics.

He is unique in that he has a vision for America steeped in scholarship and experience with grass roots community organizing. As the incoming President you can’t help but hope that this man can deliver his vision in all its entirety when he does take office. 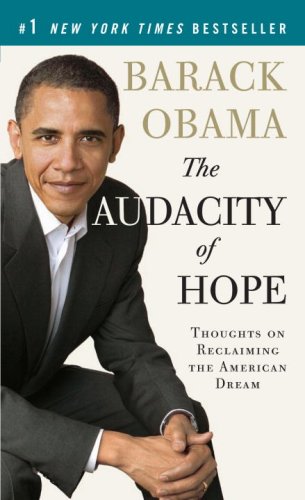 The Audacity of Hope: Thoughts on Reclaiming the American Dream (Vintage) by Barack Obama